What is a pearl? How do you tell a real thing from fake ones?

Real pearls grow in water in an oyster. Occasional beader can find them from webshops and bead stores and they are not that expensive. Not always so pretty, and no jewelry store would sell them, but they are good enough for hobby purposes.

Quality pearls. A real pearl is practically never perfectly round.

What the jewelry store requires of a pearl is round shape and luster. Luster in pearls means that in good lighting it looks like the pearl is made of several thin films. It’s like you could see beyond the surface through a couple of layers. And you see correct, that is exactly the case. Cheaper ones may shine on the surface, but you don’t see ”inside” the pearl. Real pearls are never perfectly round and smooth. If they look too perfect, they are most likely fake. What seems too good to be true, often is just that.

Pearls are born in certain oyster species. They are one of the oldest jewelry decoration mankind has used. Oldest known pearl necklace was found in Persia, castle of Susa. The castle is the winter palace of the king of Persia and the necklace was dated back to 4th century B.C.E. Pearls were girl’s best friend for centuries, until the diamonds took their place in 18th century.

How pearls are made?

To produce a pearl, first requirement is that the inner lining of the shell is nacre, that is mother-of-pearl. When a tiny piece of sand of other scrap gets between the shell and the flesh, the oyster contains it with nacre substance. It’s its natural defence mechanism. It’s probably a bit like having something between you finger and the nail, not very pleasant experience. Oysters are also living creatures that feel pain. We don’t know how much they feel pain, but some.

When pearls are farmed, it is the farmer that sticks a tiny plastic ball between the shell and the flesh. They are farmed in natural waters, lakes or sea bays. The nasty procedure is done in winter when waters are cold and oysters are most co-operative. They are a bit numb due to the cold, so they are less likely to hurt – and therefore less likely to resist. 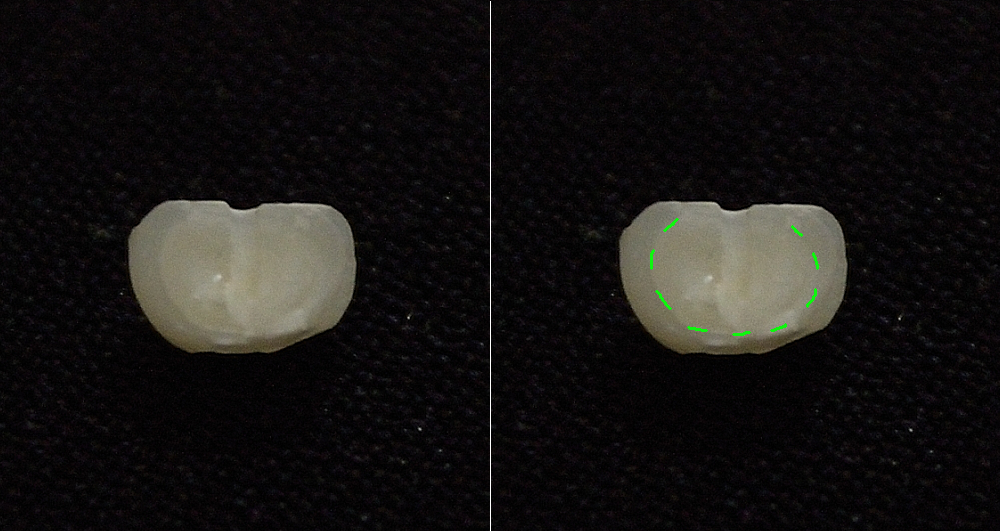 Here you see a cheap 4 mm pearl that has a relatively large ball inside.

In nature, it takes a up to 50 years to make a pearl a size of a pea and they can be any shape. In fact, they are rarely round. That’s why the round ones are so precious. In farming you get the same result in a few years, as the oyster’s task is just to cover the ball with nacre. Shape of the ball also helps make the pearl nice and round. The bigger the ball, the faster the result and cheaper the pearl. If the oyster survives the removal, it gets a new tiny ball to turn into a pearl. About half of them die in the process.

If you don’t like the idea of hurting an oyster, you can try other alternatives that give the same look in a different way. A pressed pearl is made of nacre (mother-of-pearl), by crushing the shell and pressing it into the shape. It is of the same substance but it’s a matter of opinion if it can be called an actual pearl.

The cheapest way to get a bit similar result is to choose a bead that has been sprayed with a layer of nacre paint. Paint can also be made of fish scales, mostly herring scales. They are naturally shiny.

How to handle your pearls correctly?

Pearls are beautiful but very sensitive. Do not expose pearls to any chemical substance. While you are wearing pearls, you should avoid spraying hairspray or perfume. Spray the chemicals first, later put on your pearls. Pearls don’t like sweat or frequent washing. So if you are facing a hot day, something else than a pearl necklace would be a wise choice. A pearl in a ring gets exposed to soap several times a day and might be ruined soon. A mild soap liquid every now and then is good to any pearl to wash away possible dirt and sweat it catches despite the effort.

Pearls should have an airy resting place on soft pad.

Photo by Khairul Onggon from Pexels

10.6.2018|Kommentit pois päältä artikkelissa What is a pearl? How do you tell a real thing from fake ones?